Well, I just returned from camp yesterday. I brought with me a new flashlight, a head cold, some more story written, and a closer relationship with my Lord.

I plan to speak about each of these a bit. First, the camp was held by my church, and it was a very powerful spiritual experience, let me tell you. There. I "said" it. So, yeah. It was awesome. It was awesome for other reasons, too. They had a tubing hill at the camp. And vanilla bean frappes. And green apple Mentos. And I got to see 00danno (Time time5/Varon's younger brother) wrestle with someone two inches shorter than he and get pinned for ninety seconds flat. That was cool, too.

Second, the flashlight was something I bought in the camp gift shop. It has six high-power LED lights built into it. Thus, it is awesome.

The head cold is quite a story. Basically, on the first night, Varon and I sat on top of my bunk (a top bunk) and chatted for a while. This caused our body heat to travel throughout the room and heat up the top half of the atmosphere in there. After Varon went back to his own room (with Argh in it), the lights went out and we tried to go to sleep.

Thing was, the previously expelled body heat made it very hard for my peers, particularly a certain athletic one, to get any sleep. So we opened the windows to let in forty-degree (Fahrenheit) air. Immediately there was a change, but it wasn't as big a change as my peers would have liked. So the aforementioned athletic peer went over the the emergency-exit door (which has no alarm on it), opened it, and propped it open with his boot. That caused a blast of chilling winter air to flood the chamber, and I soon curled up into my sleeping bag.

When I woke up, the door had been closed, all but one of the windows had been shut, but it was absolutely frigid in there. I estimate the temperature up on the top bunk level (which is higher than at ground level) to have been about sixty degrees. On the floor it was even colder. I did not feel well for the rest of the trip, and still don't feel fantastic, though my appetite has returned. Oh, well. The first paragraph tells how it was all worth it.

Now on to the part you all probably care about the most, the story-related crud. It's about Gone Tomorrow. See, during my first Debate tournament, I had some free time, so, when I wasn't playing Uno on a pirated-by-China deck with Legos3442 and my debate partner, I was writing the first part of the revised Gone Tomorrow in my notebook.

At the Winter Advance, I had even more free time. So I spent much of it (especially after I got sick and spending time outside in the snow was a bad idea) inside, sitting on the stairs, lying in my bunk, or kicking back on a rocking chair writing story, the last instance was accompanied by Argh beginning to write a new story, Out of the Ashes. I managed to complete parts 2-4 and do half of part 5. I have no idea how long the story as a whole will be, but at this point I consider 20 parts to be a liberal estimate, with each part being about two minutes of me talking (and whoever I get to be the female voice for Rewta and Gavla's lines).

Why was I as creative there, of all places, though? I don't know. I originally just brought my notebook to show Varon and Argh, but later I decided to write in it some more. I'm not sure why. Maybe it was just a good opportunity. Maybe it was because of the large windows, which let in lots of nature for me to view, which always helps me get inspired. The latter was probably it. Still, it helps, at least a little, that one of the inspirations for the character of Rewta was there at the Winter Advance also.

So, basically, I just ranted on for the primary purpose of telling you I have some of Gone Tomorrow done and that Argh has started working on Quake's backstory.

Really? Is that true?

No. My real purpose here was to FIRE MY LAZER! BLAAAHHH!! 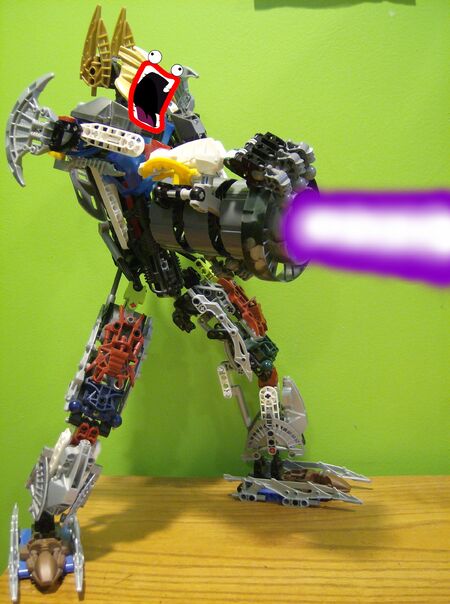